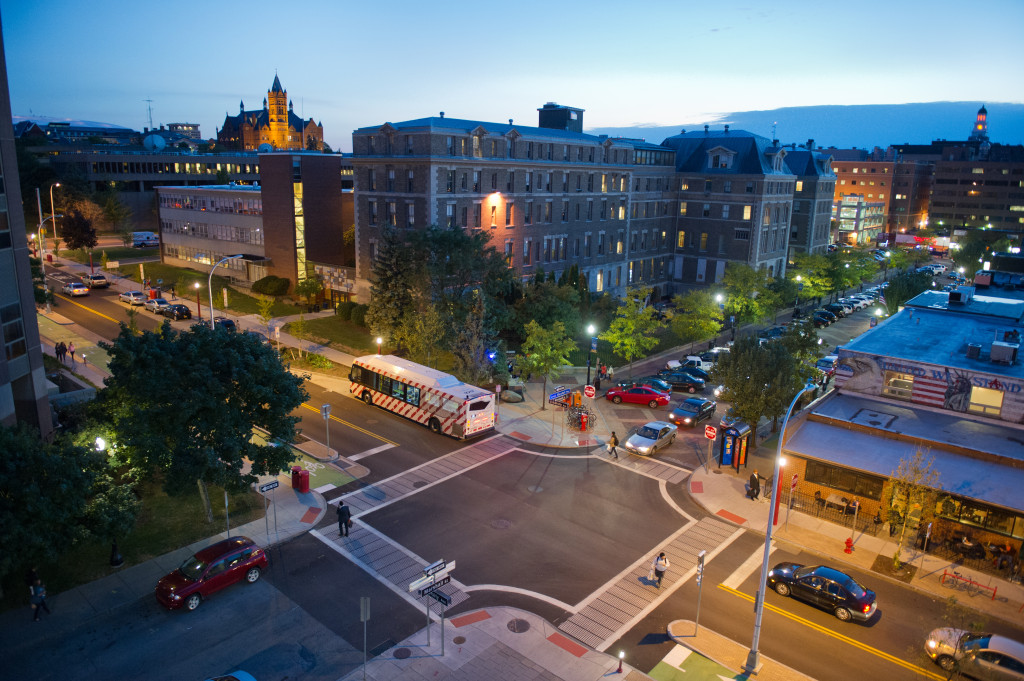 The City of Syracuse, Syracuse University and National Grid came together in 2005 to discuss the creation of a brightly illuminated pedestrian and bicycle-friendly path – the creation of a “Connective Corridor” linking University Hill with downtown Syracuse. These two areas had been bifurcated for 40 years since Interstate 81 was built through the center of these two dynamic districts of the City of Syracuse.

The Connective Corridor project was seen by former Syracuse University Chancellor Nancy Cantor as a major platform to implement her vision of the University’s engagement with the community, entitled “Scholarship in Action.”

In March 2005, Syracuse University purchased the former Dunk & Bright Warehouse at 350 West Fayette Street, and worked with former Dean of the School of Architecture Mark Robbins and celebrated minimalist architect Richard Gluckman to renovate it for educational, arts and cultural, and community use. The building opened in January 2006, housing the School of Architecture while it renovated its campus space at Slocum Hall, and is now the home of Syracuse University’s College of Visual and Performing Art’s School of Design. This was the University’s first investment in downtown.

Soon after, National Grid donated $1 million to the project. At the same time, Congressman James Walsh secured $5.8 million in federal funds for the project, followed by Senator Charles Schumer who secured approximately $4 million in public transit funding for Centro-operated Connective Corridor bus service which was announced in 2006.

In fall 2005, National Grid sponsored a community initiative to develop a vision for the Connective Corridor by gathering ideas and information from city residents, businesses, arts organizations, nonprofits, and government agencies. Six public sessions were conducted, followed by a national design competition. The concepts were voted on by the public at kiosks placed around the City.

By the spring of 2006, Syracuse University, the City of Syracuse and National Grid announced a national design competition to develop concepts for the Connective Corridor project. Field Operations, the designers of New York’s Highline, and CLEAR were selected as the winners.

Professor Julia Czerniak, principal of CLEAR and former Director of UPSTATE: the SOA’s Center for Design, Research and Real-Estate, and now Associate Dean of Syracuse University’s School of Architecture, evolved the plan into two areas of focus: A “Connector Route” and a “Civic Strip.”
The Connector was designed to serve as the main pedestrian, bicycle and transit route between University Hill and downtown Syracuse. The Connector would include dedicated bike lanes, enhanced pedestrian areas, improved lighting, and more convenient public transportation.

The Civic Strip was conceived to include enhancements to the area encompassing the Oncenter campus, civic institutions, museums, and the concentration of nearby arts and cultural organizations, connecting those venues with Armory Square. The vision for the Civic Strip was streetscape enhancements, including attractive lighting, wayfinding signs, additional green space and plantings, and public art to provide a welcoming, walkable experience for those living, working, and visiting downtown Syracuse.

In 2007, NY Assemblyman William Magnarelli (D-120) announced $20 million in New York State funding to focus on multimodal enhancements to the Connective Corridor, including the Civic Strip.

Throughout 2007, community working groups developed concepts and refined plans. The City of Syracuse began the selection process for the federal transportation component of the project. By 2008, a team of University and City employees chaired by Mark Robbins, selected local engineering firm Barton & Loguidice (B&L) to begin design work, which primarily focused on transportation improvements along the Connector route. B&L worked with UPSTATE on design concepts. Nationally-renowned urban design and landscape architecture firm OLIN Partnership of Philadelphia, esteemed lighting designer Linnea Tillett and Pentagram branding was brought in to partner with B&L to develop a “Kit of Parts” to be implemented as aesthetic components along public spaces. The bold distinctive use of red and iconic Ohm typeface was developed by the group as part of a branding kit to encourage residents, faculty and student to “USE” their City – a visual play on the word SyracUSE.

Preliminary and final designs were completed in 2009 for phase one of the Connector route – University Avenue and East Genesee Street to Forman Avenue. The project was put out to bid by the City of Syracuse in late 2010.

In 2010, working with the Near Westside Initiative, a team of artists led by Steve Powers developed “A Love Letter to Syracuse,” a series of hand-painted murals on the railroad bridges connecting Armory Square to the Near Westside, another Connective Corridor public art project. Other public art projects were launched, including works by Syracuse’s first Public Artist in Residence, Brendan Rose, who created the whimsical Walt, the Loch West Monster at Onondaga Creekwalk.

In 2011, Onondaga County Executive Joanie Mahoney announced major support for the project through the Save the Rain program. More than $2.6 million in Save the Rain support created a sophisticated green infrastructure network that will capture and manage 26 million gallons annually through the Connective Corridor project.

The Syracuse University Office of Community Engagement and Economic Development, working with the City of Syracuse, obtained $10 million in highly competitive federal TIGER funding through the U.S. Department of Transportation to the City of Syracuse in spring 2012. At that point the entire project came under auspices of Federal Highway Administration jurisdiction.

Design and engineering drawings for the section of the Connector from Forman Avenue to West Street were prepared in 2012 and 2013 for FHWA review. Following FHWA approval, construction of that major stretch began in 2013, continued through 2014 and was completed in fall 2015.

In spring 2015, the Syracuse University Office of Community Engagement and Syracuse University’s College of Visual and Performing Arts collaborated to issue one of the largest public art calls in the country. A distinguished national jury selected finalists from an applicant pool of 276 artists from 17 countries. The artists are now working on those projects, with installations set for 2016.

The next phase of the project includes final design and construction of multiple projects along the Civic Strip. Initial conceptual design work was done by the Syracuse University School of Architecture through the former UPSTATE, working with Ch2MHill on behalf of Onondaga County. Civic Strip projects are still in final design stage, with more still to come – including public art, lighting projects, wayfinding, interactive street kiosks, entry way improvements to the Erie Canal Museum, and a number of streetscape enhancements.