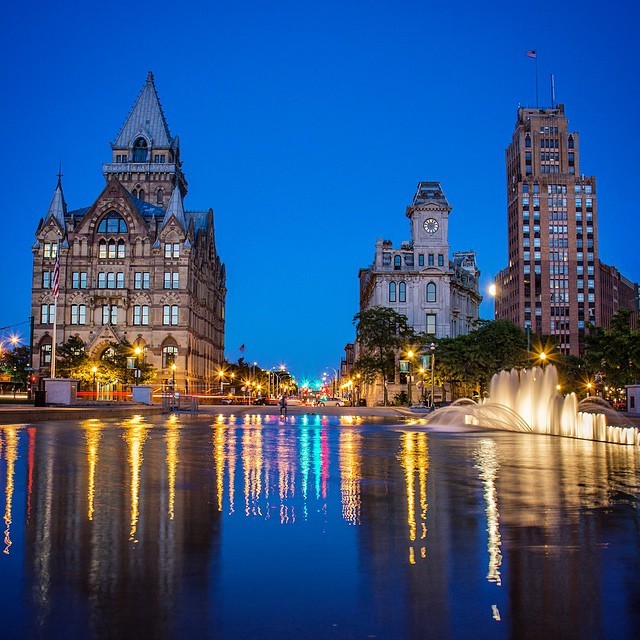 Syracuse is renowned for winter, but the City of Syracuse shines brighter year round thanks to an illumination initiative by the Connective Corridor focused on lighting iconic buildings and public spaces along the recently completed streetscape.

The “Corridor of Light” illumination project is part of the Connective Corridor’s façade improvement and public art program, funded through grants from Empire State Development.  The focus of the project has been both aesthetics and energy reduction through efficient high-quality LED lighting units that can also easily be upgraded to keep pace with the rapid evolution of lighting technology, permitting additional savings.

Innovative lighting projects along the Corridor were recently profiled in a magazine spread in Landscape Architecture Magazine.

Illumination has been a literal and metaphorical theme of the Connective Corridor – from innovative lighting projects that highlight the City’s iconic architecture, to urban streetscape projects that activate Syracuse as a more vibrant place to live, work and visit. Intelligent LED lighting systems help create sustainable smart cities, as they also enliven outdoor public spaces, buildings, parks and art works.

The Corridor’s lighting projects were designed by local entrepreneurs that include Ephesus Lighting – a tech start-up that launched at the Tech Garden incubator along the Connective Corridor, as well as Syracuse University faculty spin-off start-up companies like SenSyr.  Many of them include intelligent control systems, as well as sensor technology. 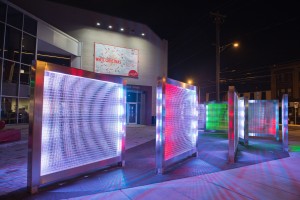 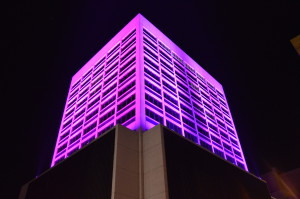 More than 23 downtown buildings are being illuminated through the Connective Corridor facade improvement program.  Among some favorites:

Public spaces lit through the Connective Corridor streetscape project include:

The Connective Corridor is currently working with the City of Syracuse on a tasteful architectural lighting project to illuminate the fountain, statuary and landscaping at Fireman’s Fayette Park.  The project, to be implemented in 2016 as part of the Civic Strip, will be guided by the aesthetic of the beautiful perimeter cast iron fence from the original design by landscape architect C. Hastings.  The park includes the Hamilton White Monument, a statue and seat in memory of Hamilton S. White who lost his life at a fire on March 13, 1899. A monument to fireman who lost their lives in the Collins Block disaster February 2, 1939 was erected by the City on the east side of the Park. The Phillip Eckel Memorial moved there 1979.

Additionally, a nationally regarded lighting architect is being retained to design and implement a Jefferson Street Corridor of Lights project as a signature illumination project.

The Corridor’s public art program, “Illuminations” also incorporates lighting into more than $650,000 in new public art that is being installed along the Corridor and Civic Strip.

“The City of Syracuse’s authenticity is defined by the character of our historic building stock and dynamic public spaces,” says Ben Walsh, City of Syracuse Deputy Commissioner of Neighborhood and Business Development.  “The innovative Corridor of Light program highlights, both literally and figuratively, what makes us uniquely Syracuse.”